Things I Did Today That Were Not Work

I dipped my fingers in cold water to show the colour changing properties of this space-age nailpolish, but my camera was all AAAHHH TOO FRIGGIN BRIGHT WHAT THE HECK IS THAT COLOUR MAKE IT STOPPPP so you can't really tell the difference. Looks cool in person, though.

Things I Did Today That Were Work:
Worked.

about me, beauty, productivity | Tagged: procrastination |

Daniel Pink: The Surprising Truth About What Motivates Us 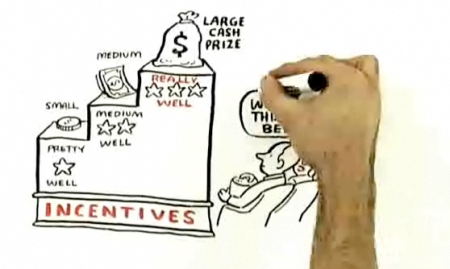 Here’s a great 10 minute presentation about motivation and incentive. Turns out that for higher-level cognitive work, financial rewards are actually a disincentive to do good work; Pink discusses other incentives that work better. Great topic + engaging artwork = solid video.

Thanks to Reub for the tip.

How to annoy your supergeek slightly less

Maybe you’re like me and you have a few friends who are computer wizards. And maybe you’re also like me in that you ask them intelligent computer questions all the time. “Hey, how do I export audio out of a Quicktime to make it into an mp3?” you might say. “Bonus points if I don’t need to download any new applications to do it,” you might add, “”

Well, your geek probably needs to know what applications you already have. Here’s how you show them. (well, for Macs. If you’re on a PC you probably have bigger problems than this, anyway.)

1.
Click on your hard drive, then on your Applications folder.

3.
Adjust the view options to display all your applications in Icon mode, then use the sliders to make the icons as small as possible.

4.
Put the labels to the right of each icon, and futz with the grid spacing until all the icons and their labels are easy to see.

6.
Trim the screengrab and attach it to your email.

Yay! (Also, I would be a bit of a heel if I didn’t end this by saying thank you to Nick, Reub, Elliott, and Ramón for solving all my interweb problems, again and again and again).

Click the image to see more photography by Ella_Marie

My favourite strategy for tackling pretty much anything is to set a timer for 12 minutes, then race it. This is a great trick, because:

1. Even if you’re a bedbound sloth, you can probably motivate yourself to do 12 minutes of something.

2. Starting work is the hard part; once you get into something, you’ll often work longer without even noticing the time pass. Before you know it, you’ll be all done making that beautiful macrame rainbow dress you’ve always wanted, and you can head off to Burning Man knowing you look exactly like a shy librarian who’s trying drugs for the first time. 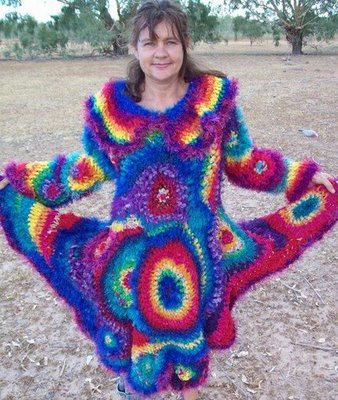 3. If you tend to get distracted (like I do! By super-interesting, important things, like this little bear that could not stop sneezing!), then the timer is a good reminder that OH YEAH BACK TO WORK even though somewhere on the internet probably there are other adorable things with allergies!

4. You can limit how long you spend on things you don’t really want to be doing. Sometimes I have to call people who talk a lot. I like to set a 4-minute timer so I can keep the whole call under 5 minutes. Not that I do that to anyone who reads this blog.

5. Most things take less time than you think. This morning I tidied up my whole apartment in 12 minutes, and the place was a total wreck when I started. It looked like hours of work but the timer proved, as usual, that it was easier than I’d expected. Now it only looks like a partial wreck; thanks, timer!

6. Once you start to figure out how long things take, you’re more likely to do them without quite so much fussing next time. I hated vaccuuming my apartment until I realized it takes me 6 minutes. Now I do it all the time, much to the delight of my neighbours (Hi, Nicolas! VRRROOOOOMMMM)

Minuteur. The only reason I get anything done, ever.

Usually I use a little digital egg timer stopwatch thing for all my timer-racing needs, but I don’t always want to bring it with me. So I downloaded this great free app called Minuteur (if you like it, you might wanna shoot the developer a few bones). It’s a little virtual desktop timer that’s really easy to set; it makes a gentle ticking noise that you can silence if it drives you bonkers, and when the time’s up it alarms and jumps to the front of your desktop and blinks at you. Bam. Easy as… eggs.

Thanks to Reuben for the tip (that link goes to an article he wrote that has some other good productivity advice buried in it).

Welcome, newcomers, to my bloog. The funniest / most-read posts are listed here.

Lovely TED Talk about creativity by Eat Pray Love author Elizabeth Gilbert. She’s a wonderful speaker, and this talk makes everything feel better. One friend who listened to it said it sounded like she was advocating religion, but I don’t see it that way; I think it also ties into Gladwell’s Outliers 10,000 hours thing.

Basically both of them are saying, if you put the pen on the paper and just keep going; the genius will probably show up eventually.

20 minutes; no need to watch, you can just listen. Here.
Thanks to Hill for the tip.

This is a great mini TED-talk (just 5 minutes long): Writer Joachim de Posado discusses the usefulness of self-control. Researchers gave a single marshmallow to a bunch of four-year old children, and said, “I’m leaving you alone with this marshmallow for 15 minutes. You can eat it if you want. When I come back in 15 minutes, if you have NOT eaten the marshmallow, you can have a second marshmallow.”

Guess what happened? The adorable, hilarious footage and some interesting research conclusions are here.
Via Joe Vriens‘ Facebook wall.

I occasionally watch that show about the Duggar family, who have 18 kids. The Duggar kids are all really well-behaved, and on one episode, mom Michelle Duggar explains that one of the skills she has the kids practice is self-discipline.

All the Duggar kids play musical instruments after the age of 6, and every day, when the older kids practice their ensemble pieces, Michelle has the little ones sit quietly to watch and listen for 10, 15, 20 minutes, even up to a whole hour. She does it not only to inspire them to become musicians like their older siblings, but also to teach them self-control.

I think it’s an amazing idea- you see so many rowdy kids out there, climbing the walls in restaurants and crushing store displays in their tiny godzilla fists.

Maybe those kids don’t ever practice sitting quietly in their home life, so when they enter school or go to a wedding or something, it’s a big shock that they’re expected to pretend not to be bored out of their miniscule skulls.

Teaching your kids to handle boredom sounds like pretty great parenting to me. I’m going to train my kids to stand completely still like little statues. And also I will paint them silver and put them outside of tourist attractions all day while they do it. Might as well make a little money off them.

The Cult of Done

1. There are three states of being. Not knowing, action and completion.

2. Accept that everything is a draft. It helps to get it done.

3. There is no editing stage.

5. Banish procrastination. If you wait more than a week to get an idea done, abandon it.

6. The point of being done is not to finish but to get other things done.

7. Once you’re done you can throw it away.

8. Laugh at perfection. It’s boring and keeps you from being done.

9. People without dirty hands are wrong. Doing something makes you right.

10. Failure counts as done. So do mistakes.

11. Destruction is a variant of done.

12. If you have an idea and publish it on the internet, that counts as a ghost of done.

By that pithy maker of many things Bre Pettis, who’s well-known on the interweb for many a thing, but best-known to me as someone who used to live in a cool NYC loft with my friends Ernie and Bert. Thanks, JP, for the tip.

Neat article about the Amish (and Mennonites) and the way in which they adopt new technologies.

I visited one retrofit workshop run by a strict Mennonite. Marlin was a short beardless man (no beards for the Mennonites). He uses a horse and buggy, has no phone, but electricity runs in the shop behind his home. They use electricity to make pneumatic parts. Like most of his community, his kids work along side him…. they manufacture very precise milled metal parts for pneumatic motors and for kerosene cooking stoves, an Amish favorite. The tolerances needed are a thousand of an inch. So a few years ago they installed a massive, $400,000 computer-controlled milling (CNC) machine in his backyard, behind the horse stable. This massive half-million dollar tool is about the dimensions of a delivery truck. It is operated by his 14-year old daughter, in a bonnet.

Freedom is an application that shuts off your access to the Internet for whatever length of time you specify. You can get back online ay time by shutting down & rebooting your computer, but in the meantime, you might actually get some work done. The app works on Macs running OSX and is free (the dude asks for a little donation; I just downloaded it without donating and I set a reminder for myself to donate to him if I like it & decide to keep using it). This looks pretty promising- will keep you posted if it makes my computer blow up or anything.
Thanks to Reub for finding it.