Belated, of course. Here, have a funny Kate Beaton comic.

Had a little sketch comedy thing to do, so I put together a costume. 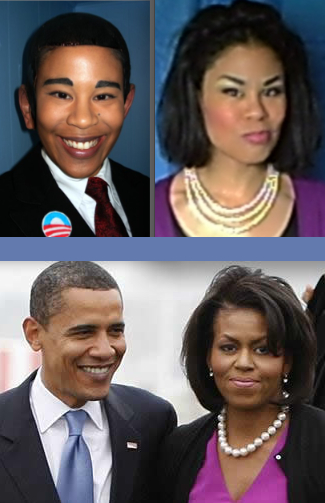 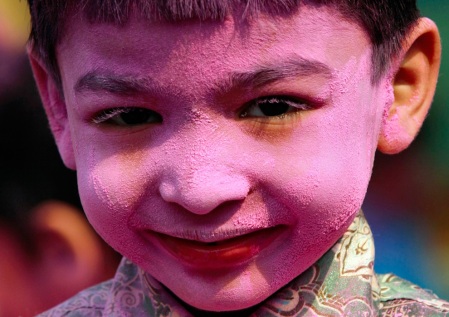 If you’re one of those people who says things like “I don’t care about skin colour! I don’t care if you’re black, yellow, green, blue, or purple!” …then you are an idiot and you should stop saying that, since I doubt you actually intend to sound condescending and dismissive, or to compare people’s real experiences of racism to the imaginary experiences of imaginary people in weird imaginary skin colours. As of tomorrow you have to stop saying it. But for the rest of today you can still say it, I guess, because today many people in India and the diaspora actually are green, blue, or purple.

It’s Holi, the Hindu festival of colour, and man is it ever beautiful. 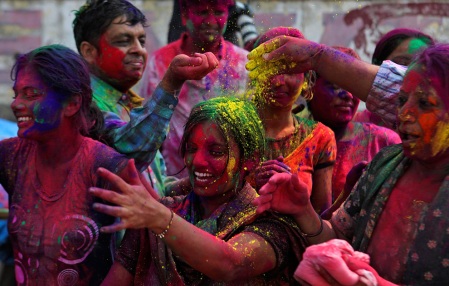 Clicking the pics will take you to enlarged versions.
Full photoset of 20 gorgeous shots is here.
Thanks to Reub for the tip.

If you poll Americans about how they feel about military service being open to people of different sexual orientations, some will respond differently depending on whether you use the term “homosexual” or the words “gay men and lesibans”.

I’ve also read interesting commentary about very subtly coded language biases in journalism, when news outlets choose to say things like “this person was killed” or “this person died”. Same phenomenon being described, but the words can frame the story- and suggest who to blame- pretty differently. Worth thinking about if you write or consume factual content- a lot of biases can be buried in seemingly-neutral copywriting.

I’d be really interested to see a poll where these same Americans are asked to “name a famous homosexual” and “name a famous gay man or lesbian”. Wonder how divergent the answers would be?

Port-au-Prince, Haiti was hit with a massive earthquake yesterday. Their infrastructure is devastated; apparently all the hospitals in the city are either collapsed or abandoned.

Canadians: if you donate any amount of money through Plan Canada, the Canadian government will match your donation.
Plan Canada is a great non-denominational organization- I’ve been sponsoring a kid in Niger through them for about 6 years and it only costs about $1 per day, pretty cool.

I wish this would happen.

Or rather, can you write like Sarah Palin’s ghostwriter?

Here are some sample sentences from her new book:

“As the soles of my shoes hit the soft ground, I pushed past the tall cottonwood trees in a euphoric cadence, and meandered through willow branches that the moose munched on.”

“I breathed in an autumn bouquet that combined everything small-town America with rugged splashes of the Last Frontier.”

Slate characterizes her style as having “multiple references to local flora and fauna, heavy use of PSAT vocabulary, slightly defensive tone, and difficult-to-parse meaning.” They even created a pretty funny index for the book. Sample entries:

They’re also having a contest to see who can write the most Palinesque sentence. Contest details here.

If you’re new to Pageslap, welcome!

This is major. Somebody call Anderson Cooper.

Daily news annoys me. It’s 70% invented; they need so much filler to make their daily allotment. Last night a major Canadian news channel ran a story about 12 small dogs found in unsanitary conditions in the GTA. It was literally a news story that could be summarized as “Sad dogs got dirty. More at 11.” On national news. This is news? I thought about it for a while but then my head exploded and I turned off the television and ran around my apartment intoning insightful headlines like “DOGS: DISHEVELED AND DISAPPOINTED. CANADIAN CANINES COPING WITH CANDIDA. PARKDALE PUPPIES… IN POOP.” …and other stchupidness, over and over, to simulate what I was missing.

Walking across China, with daily photos and beard growth

Christoph Rehage, a 26 year old German guy, shaved his head, walked across China for a year, and took photos every day as his beard grew in. He was planning to walk all the way home to Germany but he stopped in China after covering 4000+ km in a year.

Then he edited the photos together (really really well!) to create this slick and compelling 5-minute video called “The Longest Way”.
Make sure to watch it in HD (there’s a little button on the bottom right corner of the YouTube video). And X out all the ads at the bottom of the screen, so you can see the place names.

This is great, in the same was as “Where the Hell is Matt” was great. Seriously. Go watch it.

Also, Rehage has a website with a detailed travel blog, which is down right now because the whole entire internet is mobbing it. But here’s a cache of the page where he introduces Teacher Xie (scroll way down to see the content), the man to whom Rehage dedicated the video and who’s seen walking away pulling a cart in its last moments. Cool dude, that Teacher Xie.

A few days ago I posted this article about a dude named Daniel Suelo who chooses to live in a cave in Utah with no money. Someone on Metafilter wrote a response to that same article.

Apologies to Mr. Suelo, but modern western civilization is the shit

I am by no means a rich man, but in comparison to most of the world and most humans who lived in any age preceding ours, I live like a king. By the mere accident of birth, I came to live in a country that bombards its citizens with comforts. I woke up this morning and put two cups of fresh, clean water into a metal pan and boiled it on my electric stove. I then stirred in some 7-grain porridge and some raisins and cooked up my breakfast. I didn’t have to grow the grains and process them and I didn’t have to grow the grapes and dry them into raisins – it all came from the store, packaged and ready to go! From the same store, I also obtained some butter without having to own a cow and some honey without having to put on an apiarist’s suit and squeeze it out of a hive. I put the porridge and honey and butter into a ceramic bowl that I did not cast and stirred it all together with a metal spoon that I did not forge.

Scarcely half an hour after climbing out of my bed – that is, a queen-sized mattress supported by a boxspring and a metal frame, covered with flannel sheets that I did not and could not weave – I had prepared myself a delicious, nutritious breakfast. And I know how long it took because of the digital alarm clock sitting on my bookshelf – a bookshelf that is packed out with volumes on a wide variety of subjects which were written by learned men and women from all over the planet. Were I to pick up one of these books, I would find pages filled with words in clear, uniform type on smooth, machine-pressed paper. Their spines are sturdily bound and some of the covers have absolutely beautiful art or photographs printed on them. I could read it on my sofa while an electric fan controlled the temperature in my apartment and better see the pages by way of an electric light if I found the sunlight streaming in through my double-paned windows wanting. Fucking. Awesome.

Instead, I decided to watch a DVD of Flight of the Conchords while I ate. A DVD player built in Taiwan streamed images of a sitcom filmed in New York, built around the act of a guitar-playing folk-satire duo from New Zealand into a cathode ray device built in China, all for my amusement. Once upon a time, only nobility got to be so entertained, and only then if they shipped in live performers. Today, a machine on a shelf above my television used a fucking laser to extract entertainment from a paper-thin disc, all because I pushed a few buttons on a small, infrared transmitter called a “remote control.” Wow! No Pharaoh ever had it so good!

I looked at Mr. Suelo’s site for as long as I could stomach the sanctimony and noticed a number of quotes from luminaries of ages long dead. These quotes make for good copy, but I don’t know how good a job they do of decrying our age and our currency, given that these people never saw it and never spent it. Is Suelo absolutely certain that Thoreau wouldn’t have loved microwave popcorn? That Lincoln wouldn’t have wanted the extended editions of the Lord of the Rings trilogy? He did fancy a play from time to time, after all. St. Augustine’s piety was never, ever tested against central air conditioning or drive-thru burger joints.

The folks who lived without money and modern comforts in ages gone by did so largely for lack of any other choice. People crave comfort and safety – greed is naught but an extreme expression of these universal needs. The average Roman legionnaire would have gladly killed to know the comforts of a Victorian and a Victorian would have done the same to enjoy the leisurely life of a modern American, same as I would to vault into the 24th century, where waste-processing nanites keep my large intestine clean and translator microbes in my Broca’s region enable me to speak with anyone in the world as if we grew up with a common language. I’m aware that greed and sloth have us in a bit of a mess right now and I’m confident that greed will lead us back out. The energy problem won’t be cracked because we all come together and build non-profit solar power co-ops. It’ll happen when some greedy son of a bitch decides he wants in on the ground floor of The Industrial Revolution, Part Two – Green Electric Boogaloo.

The modern world absolutely teems with marvels. In a couple hours, I’m gonna hop on my bike, a miracle of a machine with a fiberglass frame and rubber tires, and ride on paved, light-controlled roads to a job where I help disabled folks manage their lives. These guys have disabilities that would doom them in a fortnight in Mr. Suelo’s ideal world. But thanks to modern medicine and machines, these men may live for much longer and in much more comfort than they ever could before. I know what a lucky bastard I am, living in the twenty-first century United States. I’m thankful to live in such a place, where a man with cerebral palsy can have orange juice whenever he pleases and even folks who elect to live in a goddamn cave get to wear sturdy boots and maintain a blog that the whole planet is welcome to read.

This video is a very clear illustration of the fact that you can’t trust photos. You can’t really trust video, either, as I’ve pointed out before. And you can’t trust real life, as I learned when I noticed that Santa had the same cursive as my mother. TRUST NOBODY, that’s my motto.