Here’s another fun 4-minute game: watch videos of people smiling, then decide if each smile was real or fake.
I got 18/20 right. The two people that fooled me both kind of look alike, I think. #3 and 4 in the photo above are the two dudes I will never trust.

HEY STAMP SO GOOD TO SEE YOU they might yell, but I’ll just glare at them out of the edge of my eyes, muttering YAH RIGHT.

Go here to play.
And thanks to Nadine for Facebooking this!

Here’s a fun way to waste 3 minutes: see how many of these corporate logos you can recognize. The catch is that they’ve all been majorly simplified into just coloured circles by designer Graham Smith. But these are global brands- for sure you’ve heard of them. I got 17 right; consider the gauntlet thrown.

Go here for the quiz.

If there was a contest for Gayest Best Videogame, Robot Unicorn Attack would win a trip to Sandals Jamaica and bring along its new interns.

This game is ridic. Basically you’re a unicorn robot and your job is to run through a purple world of sparkly rainbows and fairies, and smash through giant stars in an explosion of pretty. There are only two buttons to press and it gets faster and faster, and a dolphin cheers you on, and if you miss, you explode in a hot mess of dead robot unicorn head.

Oh also, did I mention the whole thing is set to an Erasure song sung entirely in male falsetto? Yeah, exactly. You’re welcome.

I had one particularly good run and made a crazy high score on a single life: but then my cat started chewing my power cord and I got distracted and my robot unicorn face blew off. Anyway consider this screengrab my version of slapping your cheek with a glove and issuing a challenge for highest score on a single life:

You can play it here. And there’s an iPhone version on there, too, in case you were tired of relating to other humans with eye contact.

Thanks to Bryan and Helder for putting this song into my head for the past four days straight.

You guys, go to Google today! It’s the anniversary of Pac-Man and the Google homepage is a playable game OMG!

OMG, they made it permanent OMG!

This is a beautiful game- great looking photos, accompanied by very pleasant, soothing music. All you do is look at each mirrored photo, and click the 4 differences between the left and right sides. It’s a great way to unwind after a long day. (See also: Gin and Tonics). Play here.

Here’s a fun game for your next road trip:

Helder and I killed this game today:

Try it, it’s a lot of fun (…ny People) Versus Larry Flynterview With A VampiReservoir Dogs.

Flash game: Blocks With Letters On

Have an afternoon you don’t need any more? Spend it playing Blocks with Letters On, shifting around little blocks to spell out words. Fun Flash game with delightful Britshy little animation as a reward for each level. It gets pretty tricky- I’m currently stuck at level 32. Also available for the iPhone. Get ready to ignore all your friends at the bar.

Oh, looks like I can’t link directly to the game. Hit Puzzle/Quiz (47) on the right side, then the game will be on the left about 6 options down.

That was pretty satisfying. Mostly because now I can put some pants on and leave the apartment again. 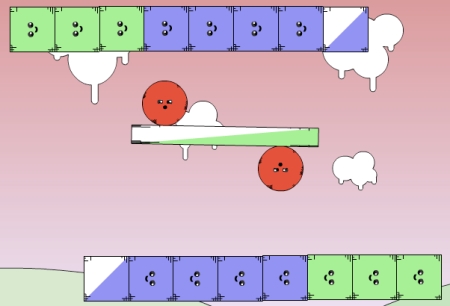 Red Remover. Might as well be nicknamed Time remover.

In case you have any spare time on your hands that you want to have totally eradicated by a very addictive flash game, may I present: Red Remover by Gaz. All you do is bust the red shapes, keeping the green ones onscreen. But it gets harder and harder, with multiple planes of gravity, and then there’s a second round that’s pretty ridiculous. You can *feel* yourself getting smarter while you play.

Here’s a tip: Look at the name of each level name before you start; it’s helpful and will become even more helpful in the second round. I am proud to say I completed the whole game at par* in “hard” mode, without any hints. I am ashamed to say that I wasted all my spare time for an entire weekend doing so.
Thanks to Emmanuel for the tip.

* Except Level 44, which I could not complete in less than 2 over par.
But I was below par for two other levels so I’m counting it.

Level 44 is for jerks

Before there was Surf ‘n’ Turf

Scooter and I stuffed our craws with a delicious medley of lobster ‘n’ sirloin last night, which got me thinking. Surf ‘n’ Turf is a catchy menu item and all, but what else did that enterprising restauranteur cross off the list before he coined the phrase (on a napkin, no doubt) back in 1967? Why didn’t he go with:

Whack-a-Kitty is just what it sounds like: awesome possum.