Theengs I looked at this weeek: 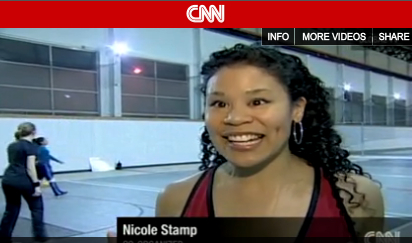 Dodgeball has become something of an obsession for me.

Last weekend, along with 19 friends, I set a new Guinness World Record for Longest Dodgeball Game Ever. We played 36h and 45 minutes without sleep, and raised about $6200 for the Stephen Lewis Foundation. 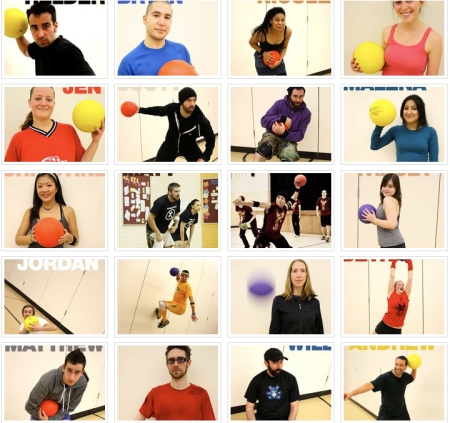 1.
Our energy really came and went in spurts. For me this was tied quite noticeably to how much sunlight was coming in the windows and whether or not any of my friends happened to be watching the game at any given moment. Late lonely nights were the worst; bright sunny mornings were the best. 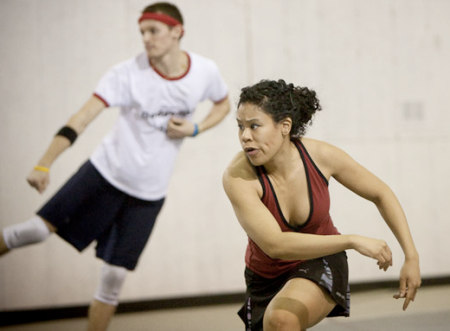 2.
I only slept two 7-hour shifts the next day, and then I felt pretty much back to normal, about as sore as I’d be after a standard one-day tournament. This was unbelievable since at 4am Sunday morning I seriously felt like the walking dead. I was so exhausted and sore I could barely stand up. By 9am Sunday morning, though, on the home stretch, I was vibrating with energy and leaping all over the court like a total maniac. Go figure.

3.
Changing socks feels really really good when you play sports for hours and hours on end. We pretty much coated our feet in baby powder every couple of hours. There were little foot-silhouettes in sprinkled patches of baby powder all along the sidelines of the court. 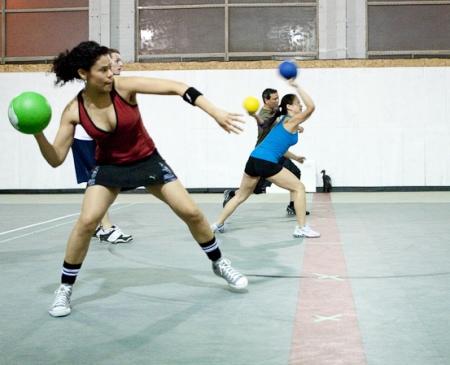 4.
Food becomes really really unappealing when you play sports for hours and hours on end. I was hungry but totally turned off by the idea of eating, so I barely ate anything: mostly just cereal with almond milk, a couple of granola bars, and some fruit smoothies. 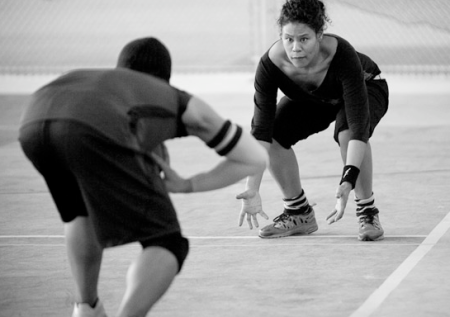 5.
I fully planned to do an hour-by-hour liveblog of the event, but my laptop was used to livestream the game on the internet so I had nothing to type on, and plus I discovered that I totally did not care at all. Even if I’d had the technological means, I discovered that once we started, documenting the experience became the least interesting part of the experience for me. 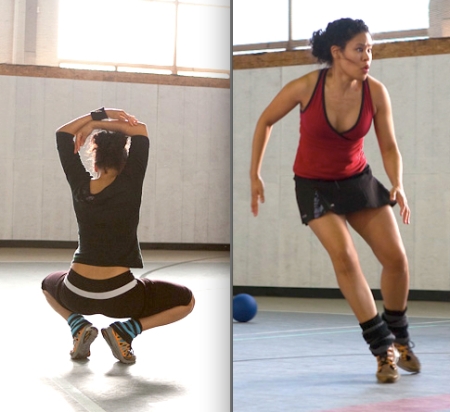 I am very grateful that there were skilled photographers in attendance who took awesome shots. All the action shots in this post are by the extremely talented Michelle Yee, who was present on all three days and probably stayed around for a total of at least 12 hours, something of a marathon in and of itself. 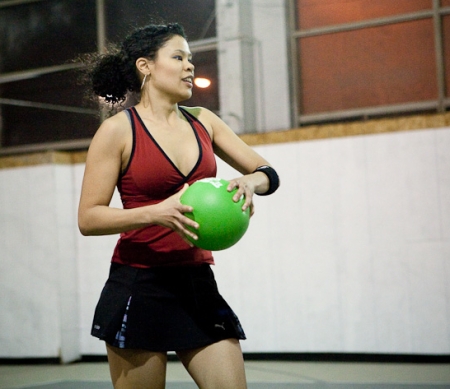 6.
I played for so long the tips of the fingers on my throwing hand BLISTERED; I didn’t even know that was possible. Somehow, though, I managed not to injure myself at all. The next time I played dodgeball a week later, I sprained a finger fairly badly playing a very gentle game of warmup catch. 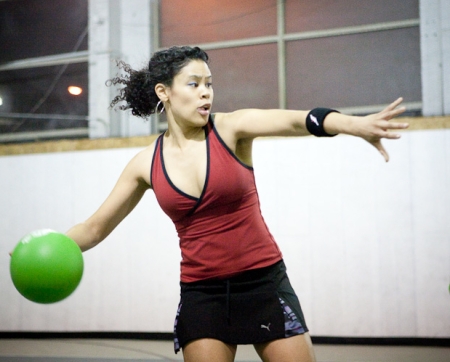 7.
My personal goal for the game was to learn how to jump. I practiced this skill for about half an hour during the first overnight by picking a spot on the court, uncomfortably close to the centre line, and setting a rule that I could not move laterally to avoid attacks- my only options were to duck, jump, or catch. It took a couple games of getting pegged in the feet, and then I figured it out. 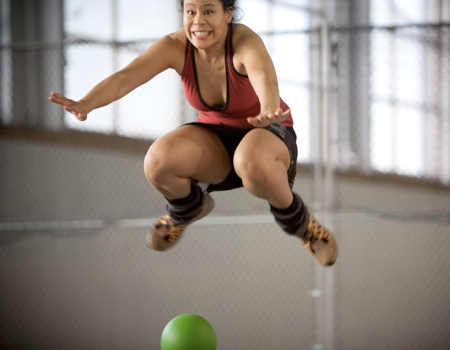 8.
We got quite a bit of media coverage, including CNN, omg.
The CNN dodgeball feature is online here. 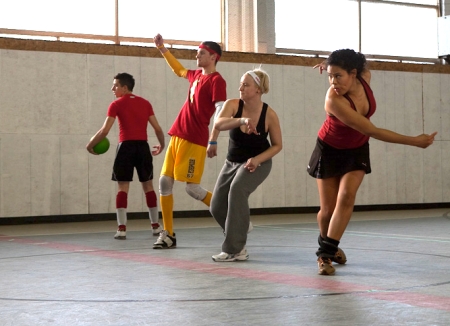 10.
My teammates are total BADASSES. They played through 36 hours of exhaustion and injuries, and they did it laughing. 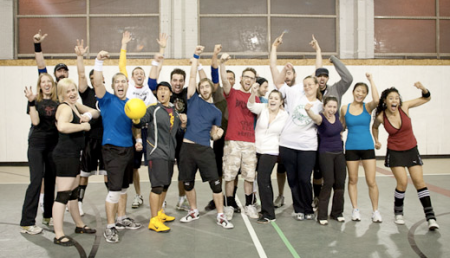 about me, athletics, hyperbole, the funny things my friends say, things i made, things i wrote | Tagged: dodgeball, marathon, stephen lewis foundation |

How news stories are made

Thanks to Colin for Facebooking this.

I don’t know if this story is true, but it was just posted on this blog as a comment on that Gilda Radner / Steve Martin dance duet I posted a couple months ago, and it’s kinda sweet.

Here I am on MLK Day 2011 remembering Gilda. It was a Friday in 1978, and at 26 I had just finished the drive from Los Angeles to NYC. The goal was to be in the audience for SNL the next day.

I walked from the Americana Hotel to a deserted Rockefeller Center, arriving about 11pm. I hadn’t slept in the previous 36 hours. The guard under the NBC marquee let me know if I wanted tickets to be in line by 6am Saturday morning. Dismayed that might not happen due to my extreme fatigue, I walked over to the solitude of the taxi stand for a ride back to the hotel.

Suddenly Gilda appeared like an angel, full of energy, and stood close beside me. I reached into my pocket and pulled out a joint, asking her if she would like to get high. She grabbed it, and we vanished into the night in the back of that cab smoking, telling stories, and having a good old time. When we parted in front of the Americana about 6am after bar-hoping (including Woody Allen playing sax) she handed me her last pass for the evening’s performance, hosted by Steve Martin and including the wonderful “Dancing in the Dark.”

I have never been the same since. I imagine you are with Lucile Ball performing comedy skits in heaven. God bless you Gilda, and thank you again for a wonderful time. You left us way too soon.

I tried to trick Peneycad into starting a blog by being all tricky, like “hey that thing that happened to you is funny, you should type it” and she did and then I was all tricky again, like “oh hey great story, why not start a blog and put that story on it” and she was like “no”. So basically she’s the one who tricked me, because look, I’m posting it here.

I was on the subway on Saturday night. It was around 10:30 – kind of a lull time, just before the going-out crowd, um, goes out. I was coming back from a baroque- concert-slash-gay-marriage-fashion-show that I saw with my aunt and my 91-year-old grandmother. But that is entirely another story.

At maybe St. George station, this guy about my age got on the subway. He was incredibly nonremarkable in every aspect except for that he had kind of searching eyes, which are entirely unusual (and entirely undesirable) eyes to see on the subway. The rest of us were playing our required roles of Weary Torontonians On The Subway Who Don’t Notice Anyone Around Them.

I half watched him choose a seat not too far away from me, next to some other guy I dutifully hadn’t noticed either. He then sat down with an exaggerated ‘aaaaaaaaaaahhhhhhhhhhhhhhhhhhhhhhhhhhhh,’ a sound which I can compare only to letting the air out of a bicycle tire. This guy was happy to be taking a load off and wanted us to know about it.

In that exact moment, the man who had been sitting on my same bank of 3 seats got off the subway, and our deflated bicycle tire gave us all a look like ‘golly, isn’t that just Murphy’s law that a better seat opens up right when I sit down, well, gee, I’ll just snag it, it seems like the only thing to do, wouldn’t you agree?’ We wouldn’t agree (or disagree), we were Not Playing. He got up and crossed to sit down next to me, leaving a seat between us.

I focussed on my subway activity of choice, which is to send text messages to my friends, which eventually send themselves when I get to ground level, but once again, ‘aaaaaaaaaaahhhhhhhhhhhhhhhhhhhhhhhhhhhh.’ This sealed the deal for me. I had to keep my eyes to myself; this guy was looking for some sort of conversation opener, and it wasn’t going to take much.

The next time I looked up, he was sort of clumsily shuffling through a deck of cards. Not in a ‘wow, I’d really better get these cards mixed up; look, all the jacks are together’ kind of way, but more of a ‘if I do this for long enough, someone will ask me if I do magic’ vibe. We’d just passed Christie station, which meant I was getting off in 4 stops.

Him: ‘I’m getting off at Lansdowne! What you see here is a completely normal deck of cards.’

He lifted his deck of cards up, which he was awkwardly holding, as if to prove that there WAS something fishy up with these cards. He kind of clumsily half- fanned through them, so I could vaguely see some writing on at least one corner of the cards. ‘What I plan to do, right before your very eyes, is erase these cards. So, first thing we nee–
FFOOOOOOOMMM

He threw an ENORMOUS fireball into the air, then did some sort of awkward sleight-of- hand and, yup, he’d turned all the cards white. But who cares. I was still back at ‘WHOA. You just threw fire on the subway. Did you really just throw fire on the subway?’ Also, I was thinking how READY this guy actually was for me (and by ‘me’ I mean ‘anyone in the entire world’) to ask him about doing magic.

The other riders on the subway, god love ‘em, they were all playing their ‘I’m in Toronto, nothing’s gonna surprise me’ roles all the way to Oscar nominations. Not a blink or a raised eyebrow anywhere. Inspiring stuff.

With one stop till he needed to get off, I kind of expected that we were just gonna have the ‘thanks, that was neat’ ‘oh really? You really think so? Thanks a lot I have been working on it I am really into magic it’s not that easy you know thanks a lot’ conversation that happens after someone almost singes off your eyebrows, but he stuffed his hand into his pocket and pulled out 3 pieces of trick rope. Kleenex, receipts and instructions for other tricks came tumbling out too, but this guy didn’t care. He was on a mission.

‘I have in my hand 3 ropes. I’m the kind of guy who carries rope in his pocket, crazy eh?’

‘You certainly are prepared,’ I managed.

‘As you can see they’re all of differing lengths. I will now transform them to be the same length.’

He started doing some clumsy movements in his palm. ‘Next stop, Lansdowne Station’ came the recorded voice. He sped it up, and I kind of glanced away so he could hurry up with whatever secret moves he needed to do.

The subway rolled into the station, and he kind of threw the rope out of his hands ‘ and now you see they’re all the same length um bye!’ he grabbed his bag, stood up, and started scooping the receipts, tissue and the instruction card back into his pockets, sliding out the doors just as they were closing.

I laughed and laughed to myself. I tried to catch the eyes of the other passengers, but they weren’t having any of it.

– Andrea Peneycad doesn’t have her own blog.
(yet)

PS, Here is an unrelated link.

I had no idea Ryan Gosling was so charming. Or that Michelle Williams was so interesting. Man, I liked this movie. The dialogue was mostly improvised; the Blue Valentine shooting script is online here.