Egg containing a chicken. But which came first?

The other day I was half-asleep while Scott made breakfast. Out of nowhere, he said,

“I found something awful in an egg. You wanna see it, or not see it?”

“Are you kidding me? Outta my way.” I haven’t leapt from a bed that fast since the house caught fire last year.

It was a tiny, jelly-bean sized chicken embryo. Heart, blood vessels, and eye were clearly visible.

A quick browse of the interweb makes me think my little Foghorn Leghorn was about 3 days old.

Now some people might have been grossed out by Chicken Little here, but not me. I scientifically removed it from its veiny yolk with a fork and plopped it onto the table, where we could gaze at it in wide-eyed, horrified joy. 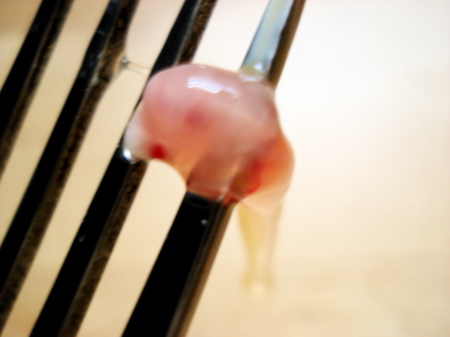 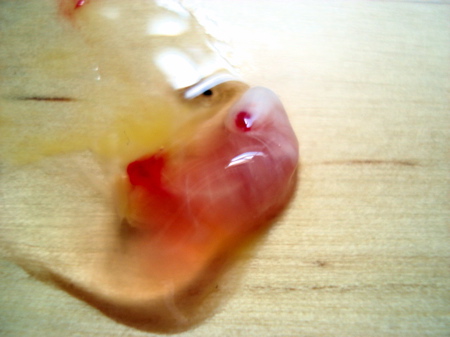 I dunno about you, but when I make a meaningful scientific discovery I always like to consult with colleagues, so I called the cat over to investigate. Like any true scientist, the cat collects his data methodically. In this case he used several of his senses to gather qualitative data about our little specimen. He looked at it intently. He sniffed it daintily. He licked it oh-so-gently. And then he swallowed it with a single toss of his fur-covered head, smacked his chops, and looked expectantly in the bowl in case there was another one.

By the way, we scrambled the remainder of that egg with three of its siblings, then scattered on some shreds of sharp cheddar, coarsely-ground black pepper, and a few dashes of Tabasco. Science is delicious.

This entry was posted on Monday, October 20th, 2008 at 9:35 pm and is filed under animals, cute, food & drink, i am not a crazy cat lady, ick, it's made of science!, medical, things i wrote. You can follow any responses to this entry through the RSS 2.0 feed. You can leave a response, or trackback from your own site.

18 Responses to Egg containing a chicken. But which came first?