Canada has one Right-leaning party, the Conservatives, and THREE left-leaning parties, the Liberals, New Democratic Party, and Green Party. (And some Independents, and a few other, smaller parties that I won’t get into here. Plus a large French party- the Bloc Quebecois- but since the people who vote Bloc seem to do so for reasons tied more to culture than to politics, for this post I’ll skip them too).

Anyway, my point is that less than half the Canadian population tends to lean Right- but on the Right, there is only one party, so that party gets all the Right-leaning votes. To generalize, all Right-leaning Canadians vote Conservative.

Left-leaning Canadians, arguably a more idealistic group, split themselves into smaller camps among the Liberal, NDP, and Green Parties- all Left, but a Left divided. Divided they often fall, into a Conservative majority government.

There’s a Canadian election looming, called early by the current (Conservative) Prime Minister. It’s looking pretty good for him right now, so a lot of Left-leaning people are talking about strategically voting in this election- in other words, voting for the Left party that’s most likely to win in one’s riding, instead of the party one feels most politically aligned with. They’d rather have leadership that’s “not quite as Left as they want” than split the vote and allow conservative leadership to take the majority.

Here’s a site that allows Canadians to input their postal code and determine the ideal Left-leaning strategic vote for their riding.

This is that site’s evaluation of the current polls:

Here’s an interesting 2003 interview with US playwright Tony “Angels In America” Kushner, in which he addresses the US version of this concern:

[Kushner]:
I have said this before, and I’ll say it again: Anyone that the Democrats run against Bush, even the appalling Joe Lieberman, should be a candidate around whom every progressive person in the United States who cares about the country’s future and the future of the world rallies. Money should be thrown at that candidate.

And if Ralph Nader runs — if the Green Party makes the terrible mistake of running a presidential candidate — don’t give him your vote.

Listen, here’s the thing about politics: It’s not an expression of your moral purity and your ethics and your probity and your fond dreams of some utopian future. Progressive people constantly fail to get this.

The GOP has developed a genius for falling into lockstep. They didn’t have it with Nixon, but they have it now. They line up behind their candidate, grit their teeth, and help him win, no matter who he is.

[Interviewer]:
You’re saying progressives are undone by their own idealism?

[Kushner]:
The system isn’t about ideals.

I’m always curious about what people do when faced with this dilemma.

If I may, what do you guys do? Or what would you do?
Do you vote for the party you like the most, no matter what else is likely to happen with your riding, or do you vote strategically, casting a vote in favour of a party that sometimes annoys you, but which would help shut out a party you fundamentally distrust?

(As always, anonymity is totally cool here. I don’t get nearly enough trolls.)

Last summer my boyfriend (nope, not that Scott Hepburn, this Scott Hepburn) went to a comic book convention in San Diego. While frolicking in the ocean, he dove face-first into a wave that contained a sizeable jellyfish.

He’s very manly, so although his eyes watered, he didn’t cry. Instead, he used the Dune mantra to overcome the insult to his face, reminding himself and anyone who would listen that “Just because your face feels like it’s on fire, doesn’t mean it’s actually on fire. It’s a trick.”

The other day I was feeling handsy, so I made him a little present to belatedly commemorate the experience. 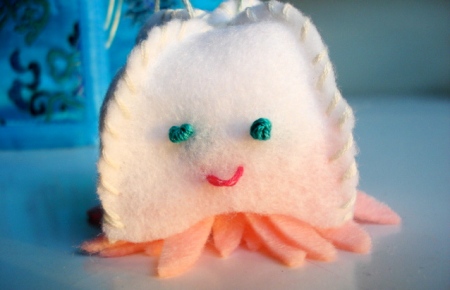 Next up I’m gonna make a life-sized soft-sculpture of his head using pantyhose stuffed with cotton batting, and then make a whole bunch of jellyfish with velcro on them and we can toss them against the pantyhose head and see if they stick. Fun with crafts!

about me, animals, cute, design, love, things i made | Tagged: craft, felt, jellyfish |

Abnormal Things I Saw On My Way Home, Volume 2: Parkbread.

I often walk through a small, pleasant park on my way home. Sometimes I see children galumphing, or squirrels scrampling, or wee birdies flurping. And sometimes I see an assortment of bakery products a-laying in the dirt.

You might say, “Well Nicole it’s there for the birds”. I might say, “But who has a surplus of five loaves in four varying loaf-shapes of bread? It’s not a bakery- they’d have a bigger surplus. Is it a lady who bought nine different loaves of bread and was only able to use four of ’em? It’s weird, I tell you. Weird.”

Somewhere there's a couple of fish waiting for a picnic.