In the 1970s, ladies maintained their girlish figures by eating rather different foods than we eat nowadays. And back then, if they photographed their culinary achievements, they often included inedible objects in the background, objects that stand today as a sort of bric-a-brac time capsule for the era, or else as ornamental evidence of the extensive and inappropriate pharmaceuticals usage of the era.
CandyBoots has a whole site full of this gold, but to whet your appetite (you see what I did there?), here are some examples: 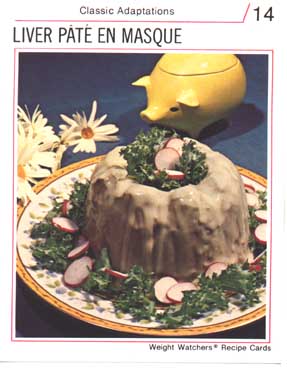 I didn't think liver could look worse, but I was incorrect.

Personally, I would have been inclined to call this next one the Frankfurter Anaconda with Pineapple Victim, but maybe I’d have found it more spectacular in the mid-1970s: 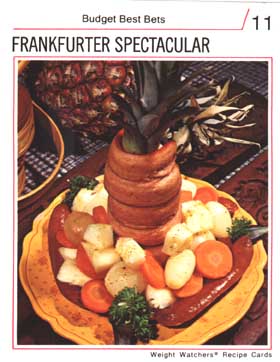 I refuse to make a joke about this. 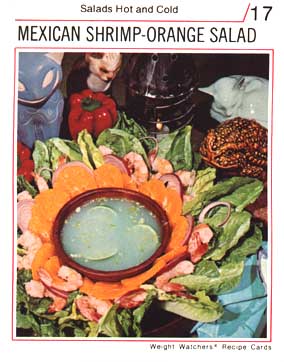 Toad in photo, do not want.

Actually, you know, the more I look at these monstrosities, the more I start to think I might just skip lunch. Maybe that’s how the cards were supposed to work.

This entry was posted on Monday, August 11th, 2008 at 3:46 pm and is filed under doing it wrong, food & drink, ick. You can follow any responses to this entry through the RSS 2.0 feed. You can leave a response, or trackback from your own site.